Apart from being so beautiful, native Pink Lady’s Slipper orchids evolved to attract specific pollinators by fusing and expanding various parts. Botanists have used many terms to describe the complicated and unusual flowers. These words are fun for me if they help me notice new details. But not to say to anyone. They just get annoyed. 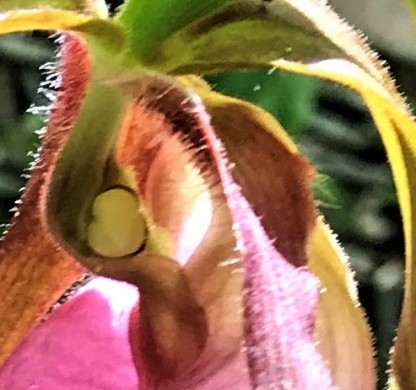 Roots. Many orchids are tropical epiphytes (upon a plant) that aren’t parasites (living on another organism and taking nutrients from it). Temperate orchids are terrestrial with their roots in the ground. The long white roots have a mycorrhizal and beneficial association with many fungi in the same habitat.

Leaves: Left below. The subopposite, paired basal leaves have plicate (folded) veins. Sub means almost. One leaf is inside the other and not simply opposite at the same node. The shape is ovate (kind of oval) and the edges are entire (smooth). Right: a new shoot. 5-9-12 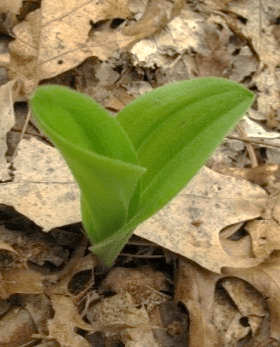 Stems? Below left: a mature orchid with a bent flower stalk (scape). I also find many straight flower stalks of different heights all of which, I assume, help these orchids reach for optimum light in a forest with dappled shade.

So where is the stem? The genus name, Cypri, comes a Greek reference to Aphrodite, and pedium refers to a Greek word for sandal. Acaule means stemless. The botanical definition of a stem is the plant part that bears the leaves. What looks like a stem on a Lady Slipper is the leafless scape. The real stem is tiny and located between the two basal leaves. It continues underground as a rhizome (an underground stem). Other slipper orchids that do have leafy stems are cauline and not acaulescent. Left below: Showy Lady’s Slipper Cypripedium reginae and (right) Large Yellow Lady’s Slipper Cypripedium parviflorum var. pubsescens, both at the Garden in the Woods in Framingham MA. 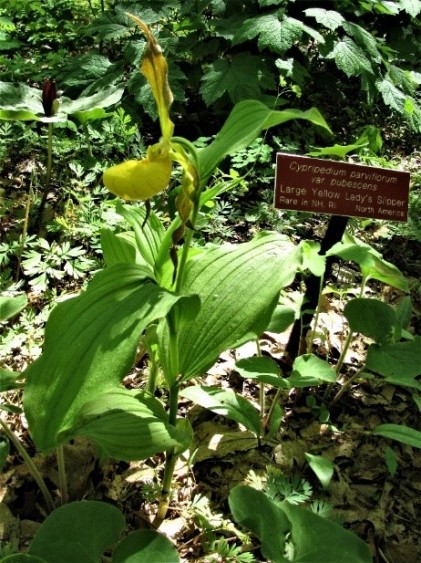 The flower is bilaterally symmetrical like your face: the same on both sides and different top to bottom. It is also resupinate. The lip or “slipper” starts out on the top but twists 180 degrees. I’m not sure when it twists. It seems to be upside down early on. There are some non-resupinate native orchids where the lip stays on top like Grass Pink Calopogon tuberosus (below right) at the old Wellesley College Greenhouses. The “attractive” lip, that draws in a pollinator, is up and the column (explained below) is down. 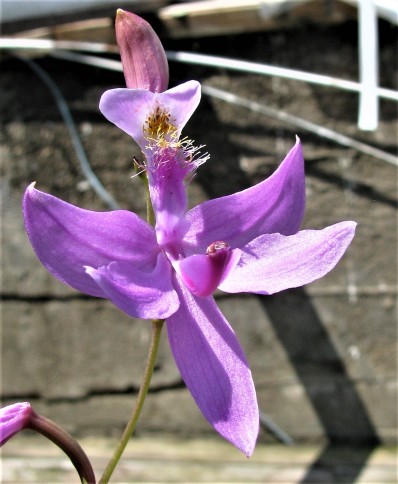 Here is the hard part for me to see. A Lady Slipper is a monocot usually with 3merous parts or divisible by 3. I couldn’t figure out what was what until I read that a green bract tops 3 sepals and 3 petals. A bract is a term used to describe parts connected to flower that aren’t sepals, petals or leaves although some can be leaf-like. But I still couldn’t see 3merous parts.

Sepals: one sepal, that hangs down behind the petals, is really 2 fused sepals (connate, synsepalous). The third sepal, the same size as the two fused ones, is just below the bract. I smile as I think about humans struggling to make plants fit into human descriptions and categories.

Petals: Inside the sepals, 2 longer, thinner, twisted petals have similar colors. The third petal is a large inflated pink pouch called a lip or labellum. It has a vertical slit with the edges rolled in, so a hefty pollinator is needed push its way inside guided by the darker veins. Directional hairs and in-rolled edges prevent the pollinator from leaving that way but light reveals a second exit near the top of the pouch (below).

Column: Orchids have fused two filaments (stamen stalks) and the style/stigma (top parts of the pistil) into a column. Two round, sticky wads of pollen (pollinia) sit on top of the column. But where is the third stamen? It is a sterile stamen (no pollinia) called a staminode that partly covers the exit. A sticky stigma, or flap, attaches to the column. I never saw it on the Pink Lady’s Slipper. The ovary (where seeds are formed) extends out from the column under the bract and behind the fused sepals.

Hairs are (glandular–pubescent). Pubescent means hairy and glandular means there are tiny little blops on top of the hairs (above).

I did see that stimatic flap (I think) behind the staminode of a Large Yellow Lady’s Slipper (below right). The bract is further back than the one on a Pink Lady’s Slipper and looks more like a small leaf. The entrance is not a slit but a round hole. 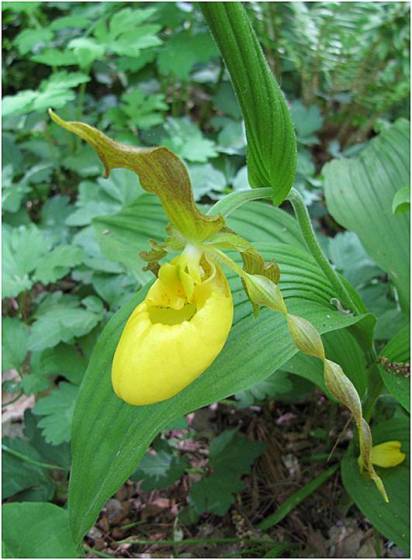 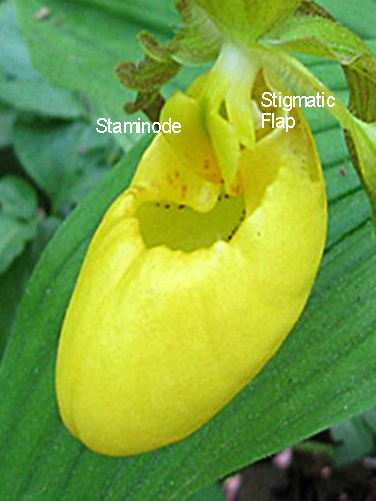 A pollinator must wedge itself between the stigma and staminode and maybe drop off a wad of pollinia it brought from another plant. Maybe it will pick up some sticky pollinia on the way out. If the pollinator is too big to get out by that smaller exit, it is trapped and will die. It needs to be big and strong to shove its way in but not too big to get out. Did you get all that? This evolved strategy is mind boggling to understand and even harder to describe, much less see.

Fruit and Seeds. If the flower isn’t pollinated it will not form fruit, so I often find the bract after the flower has fallen (below left). I did find a few that had been pollinated and forming fruit (a capsule) from the ripened ovary. The other flower parts wither because they are no longer needed (below right). A capsule is a dry dehiscent fruit that opens to release many tiny seeds.  They have no endosperm or nourishment to feed them before they create green leaves. But they get help from the fungal (mycorrhizal) relationship to start growing before the plants can feed themselves. I have never opened a capsule to see the seeds because I didn’t want to pick any. 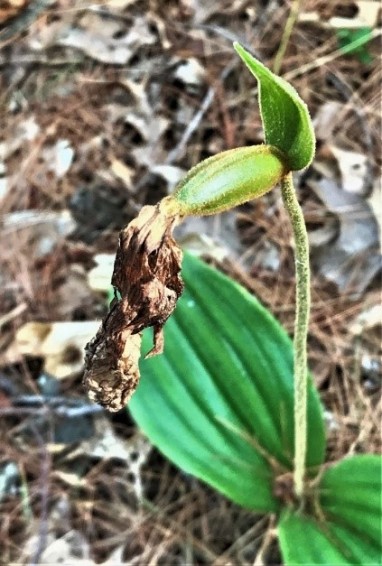