One of my favorite spring finds is a Pignut Hickory winter bud opening in the dry upland woods of Southern MA. It looks like a strange tropical flower with huge petals. I have to be on my toes because it only lasts like that for a short amount of time before I see it is really a group of compound leaves. One friend describes these buds at this time as “hands coming out of ruffled sleeves”. There are beautiful color transitions between soft purples, salmons, golds, yellow greens, gray greens and many more. 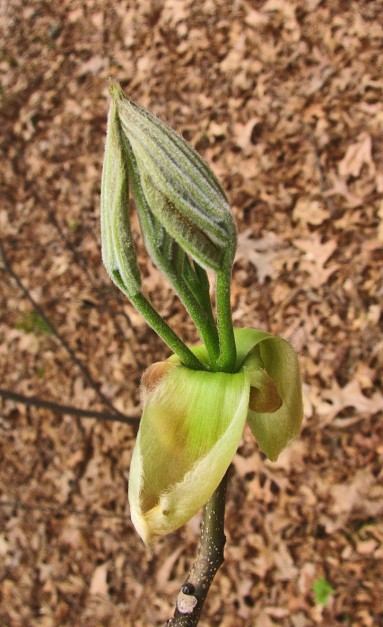 My drawing below looks like a bird. What seems to be its wings (or “petals”) are accrescent bud scales. What?

Top left below: Reddish bud scales continue to grow (are accrescent) after they open. That’s why they look like petals but their purpose is not to attract a pollinator. The bottom picture shows compound leaves expanding out of the bud scales that will soon drop and leave bud scale scars at the base of this year’s new shoot.

Twigs and Winter Buds. In winter (left below) terminal and lateral buds protect new growth to come. They are located above leaf scars and covered with imbricate (overlapping) bud scales. Right: a closeup of the smaller lateral bud above a shield-shaped leaf scar where last year’s leaf was attached. Inside the leaf scar are vascular bundles (dots that that form a smile) where xylem (water pipes) and phloem (sugar pipes) close off during winter. Bud scale scars form concentric circles where a terminal bud had dropped its scales and indicates the growth of one year. The little white dots on the twig are the lenticels that allow for gas exchange through a protective epidermis or outer layer. 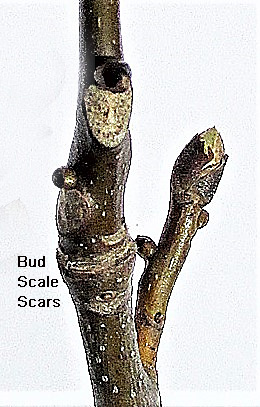 Bud Scales: There is an extension of one of the bud scales that looks like a tiny leaf (below). I found one in the fall (left) and another in the late winter (right). 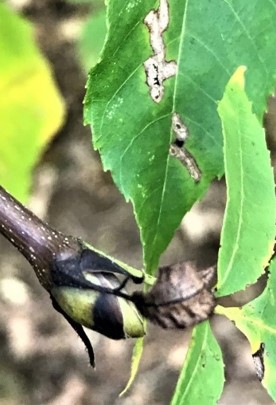 Bark is the protective outer layer on woody plants. A new inner layer of bark (phloem) is formed each year but the thickness of bark remains the same. Different bark patterns are formed when a new layer of wood (xylem) increases the girth each year (annual rings) and the bark stretches, cracks, peels, or sloughs in various patterns to stay the same width.  Left below: this twig has 3 different locations where terminal bud scales dropped so I can see the growth of 3 different years. The twig gets fatter and the color changes slightly each year as new layers of wood and bark are formed. Right: a mature Pignut Hickory bark breaks into vertical furrows but is not as shaggy as a Shagbark Hickory. 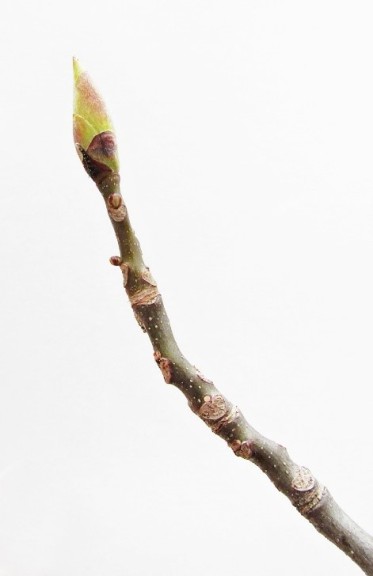 Leaf Stalks: (below) the pattern of leaf stalks (petioles) radiating out at different angles shows the alternate attachment that spirals around the twig. The thickened leaf base (pulvinus) is the same shape as the leaf scar. Left below: spring petioles are maroon and the buds are small. Right: fall lateral and terminal buds are larger and easy to see above each leaf stalk. 10-7-18. The color has changed too.

Compound leaves have separate leaflets attached to a rachis above the petiole where it is attaches to the twig. A Pignut Hickory has 5-7 leaflets that are odd-pinnate or arranged like a feather along the rachis with a terminal leaflet. There are no buds at the base of leaflets in a compound leaf. One more term (arghhh): if the leaflets have a stalk it is called a petiolule (try to pronounce that one). I love this stuff. On a mature Pignut Hickory the petiole, rachis and underside of the leaves are primarily glabrous and not hairy: Latin name (glabra). However, I can see a lot of hairs on the margins or edges of younger leaves (left). 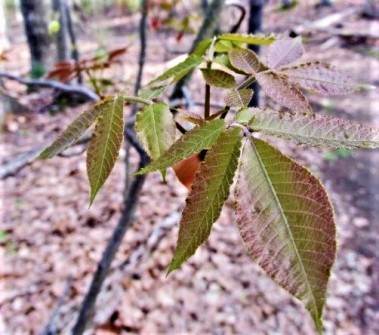 Flower: The flowers are wind pollinated (anemophilous). I have to make an effort to see them because they don’t need to attract a pollinator.  Male and female flowers are separate (imperfect) and appear on the same tree (monoecious). The pendulous staminate (male) catkins (a cluster of stalkless, florets sometimes called a spike or ament) appear at the base of a new shoot. They hang from a peduncle (flower stalk) often in groups of three. Each little bump on a catkin is a bract  or scale that protects several stamens until the spring catkins lengthen and the stamens ripen to release pollen. 5-16-12 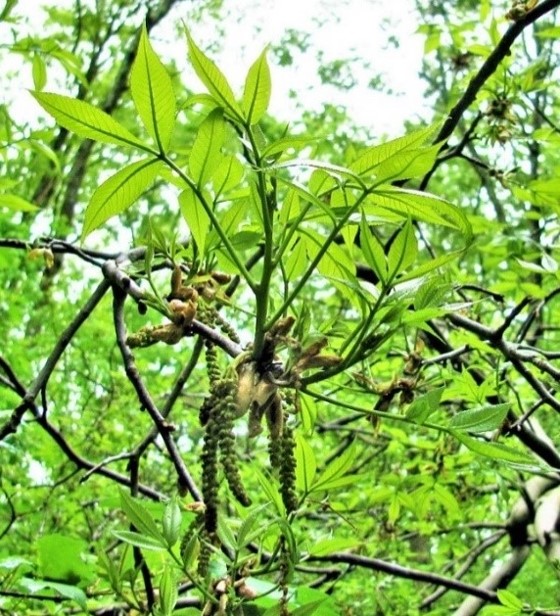 Left below: The female spike (stalkless flower cluster) appears at the top of a new shoot. 5-26-12. Right: 6-3-12. Surrounded by a whorl of bracts (involucre) they will eventually become the fruits. 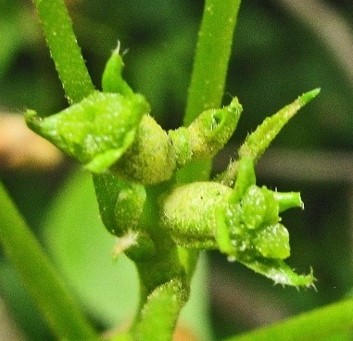 Fruit: A botanical nut is a seed inside a thin, hard shell (the ovary wall) that does not have to dehisce or open to release the seed before it can start to grow. But a Pignut has another layer called a husk formed from the involucre of bracts on female florets. The fruits are mostly pear-shaped and hairless. The seed inside the nut is, I guess, only fit for pigs. In the picture below I can see the pervious year’s dark brown husk, the tan unopened nut with the husk gone, and the opened nut where something has enjoyed eating the seeds. 4-15-18 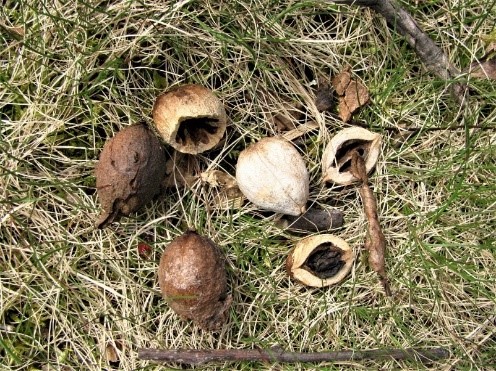 Accrescent: increases in size with age

Pulvinus: thickened base of a leaf stalk

Petiolule: stalk of a leaflet