Ericaceae is a large, varied family in New England that is tolerant of our acidic soils. It includes blueberries, rhododendrons and many others.

Name: Unusual evergreen leaves make Spotted Wintergreen a treat to find all year. More striped than spotted, maculata is Latin for spotted. Chimaphila comes from the Greek words chima “winter” and phila” “love”. It’s helpful when the scientific names are descriptive. I used to play a board game about Uncle Wiggily, and there was a rhinoceros-like monster called Pippissewah. I don’t know if that has any significance. 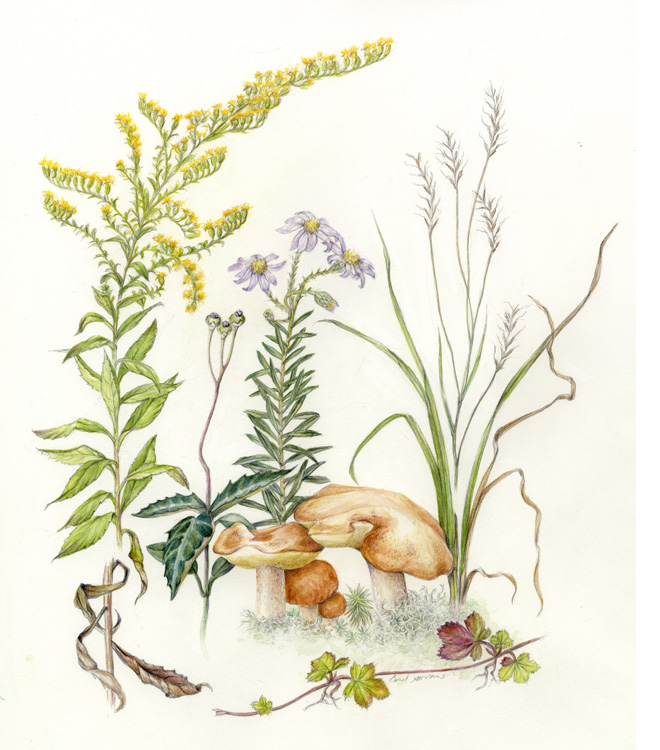 Habitat: This plant seems to thrive in disturbed manmade habitats as well as the dry upland woods close by. Above: I found Spotted Wintergreen in the fall with Rough Goldenrod, Stiff Aster, Little Bluestem Grass, Cinquefoil, a moss, a fungus, and a lichen happily growing on the berm of an abandoned parking lot in a State Park in Eastern MA. I like that native plants and other organisms will eventually take over if a man-made area is not used.

Roots/Shoots (Stems and Leaves) Smaller roots help anchor the rhizomes (underground stems) that can create a clonal colony. When mature enough to form flowers they will be able to cross-pollinate so the seeds will have genetic diversity. Two reproduction strategies are an adaptive plus. This small perennial has a semi-woody stem above ground, some call a sub-shrub. Not quite big enough to be a shrub but not herbaceous either. The red stems, red petioles (leaf stalks), red bud scales and red beneath the dark green leaves make it stand out from other plants. I’m thinking that red color helps protect the leaves in winter when the bright sun might burn them. I’m not sure what caused the lighter green colored leaves on the right.

Leaves: The sturdy leaves help them survive the drought of winter when water freezes and is difficult to absorb. I might find 2 opposite leaves at the base of a stem and then a whorl of 3 leaves beneath the flowering shoot. The pinnate venation (like a feather) creates a beautiful vein pattern that is easy to see because of the lighter color. The leaf shapes are described as ovate or lanceolate which means they are variable but usually longer than wide and larger below the middle.

Leaf edges or margins are toothed, but there is also a variety of teeth. Different sources describe the leaf edges as widely spaced dentate or denticulate (little dentate) meaning teeth point out as opposed to pointing forward which is serrate or serrulate (little serrate). I also saw crenate used which means round toothed or scalloped. The leaves above have teeth pointing forward (serrate).

Inflorescence: After a flurry of earlier spring flowers, I look for the unbranched peduncle (main flower stalk) topped with an inflorescence or cluster of flowers. Individual flowers (florets) hang down from their own stalks (pedicels) that emerge from the same point (umbel).

Sepals and Petals: the round buds formed from 5 tiny sepals and 5 white petals open and face down. The buds look like Victorian gaslights. These were really hard for me to photograph well. I will try again next year. Or maybe a drawing. 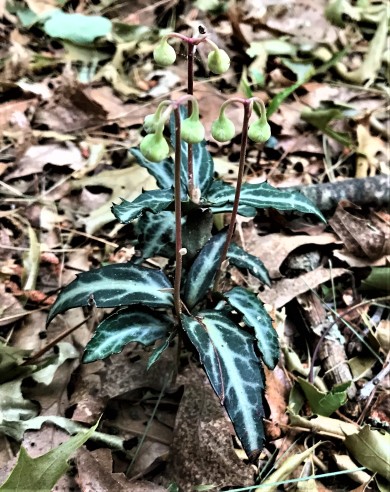 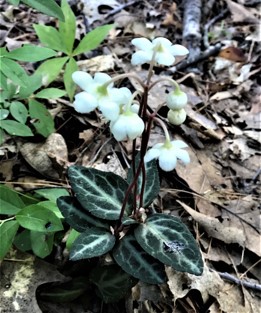 Reproductive parts (Stamens/pistil) When the florets start to turn up, I can finally see the 5 pink stamens and green pistil (below).

Stamens: 5 stamens with bifurcate anthers that divide into 2 parts and scatter pollen through holes at their tips. The short filaments (stalks) are described as hairy (villous and ciliate). Villous is soft and shaggy and ciliate describes the fringe of pink “fuzz” surrounding the green ovary.

Buzz Pollination: To release ripe pollen, solitary bees grab the stamens and move their flight muscles rapidly to vibrate the pollen loose. Blueberries and cranberries are also buzz pollinated. I have never seen this but will be on the lookout next year.

Pistil: the superior (above other plant parts), subglobose (almost round) compound ovary has 5 bright green lobes that will ripen into a fruit. A ripe fat stigma on a short style (neck) will receive ripe pollen from another plant. So different from the pointy Skunk Cabbage stigma. The diverse shapes of similar flower parts that have similar functions are exciting for me to discover.

Fruit: After the nodding flowers turn up, drop their petals and stamens that are no longer needed, the ovary ripens to form fruit. Below left: the green fruit in my neighbor’s mulch. Right: the fleshy sepals and flat stigma are still there. 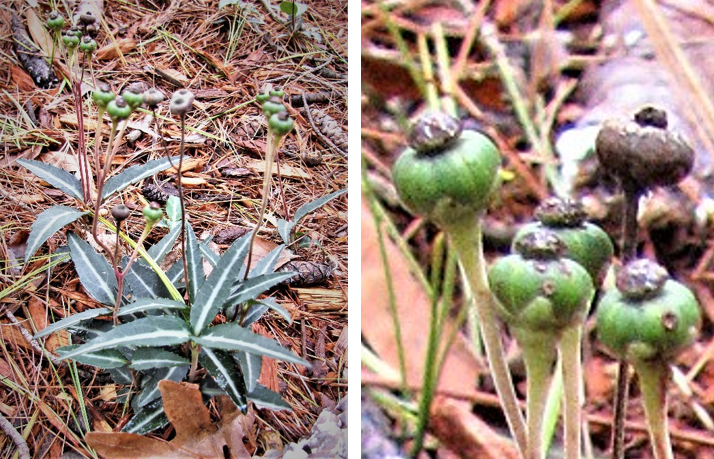 Below: This capsule stayed on until the following February. The round flat stigma looks like a button on top of the 5-parted loculicidal capsule. A capsule is a dry fruit that often opens along a seam (septicidal capsule) to release seeds. A loculicidal capsule opens along the locules which are the empty spaces between the seams. Notice the openings are not at the seams. Fruits are interesting to try and define but many don’t conform to existing definitions. This one does. No seeds left inside the fruit.

One thought on “Spotted Wintergreen/Pippsissewa”