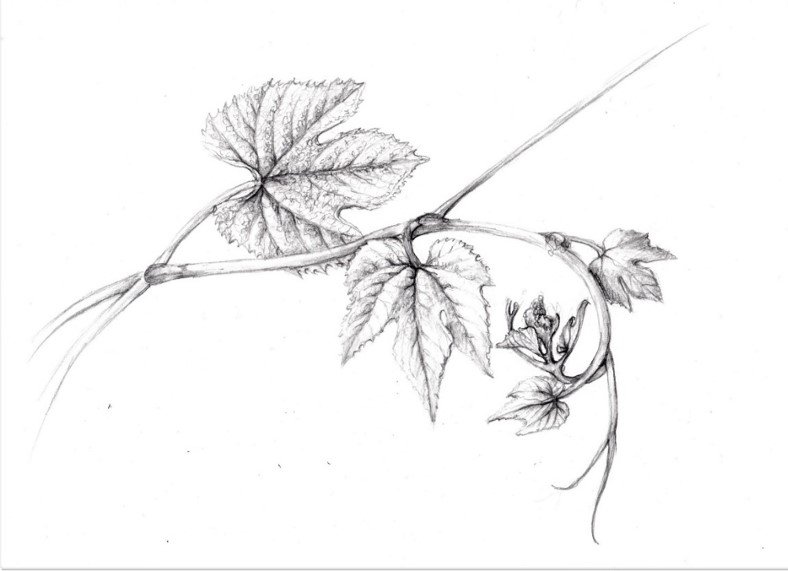 The grapevines I follow grow in disturbed man-made altered habitats. I think mine is Vitis labrusca, one of several native grapes, because there are tendrils or flower clusters opposite almost every leaf. This was hard to see until later in the season. 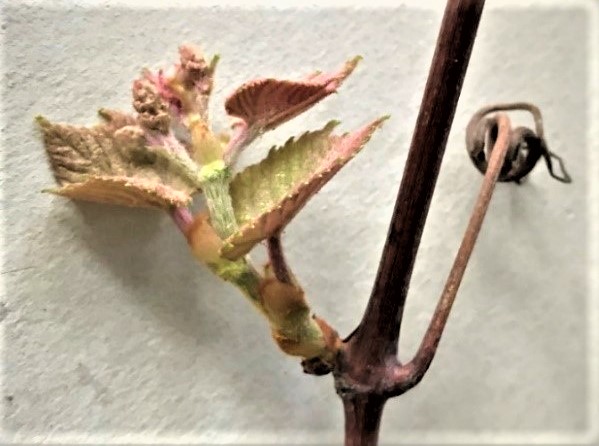 Name. The Vitaceae or Grape Family includes climbing vines with forked tendrils and a fleshy fruit (berry). This grape is native and very aggressive. Vitis is Latin for vine. Some describe a woody vine as a liana. Labrusca means the foxy, musky odor of wild grapes, not foxes, and is an ancestor of Concord grapes. The L. after the Latin name means Linnaeus named it and the name hasn’t changed.  Yay!

Shoots (stems, bark, buds, leaf scars). Below left: Stems are striate and thickened at nodes (where buds are attached). Winter buds are collateral (more than one bud), and globose. One on top is starting to open so not round anymore. A crescent-shaped leaf scar is left by last year’s leaf. Right: New leaves on older peeling stems are surrounded by last year’s tendril. 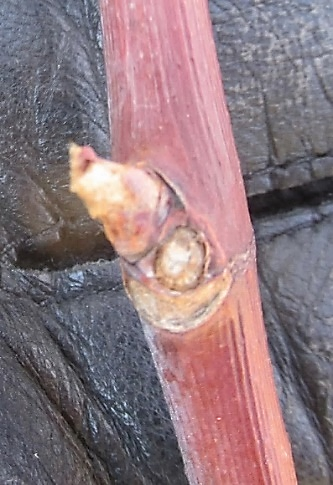 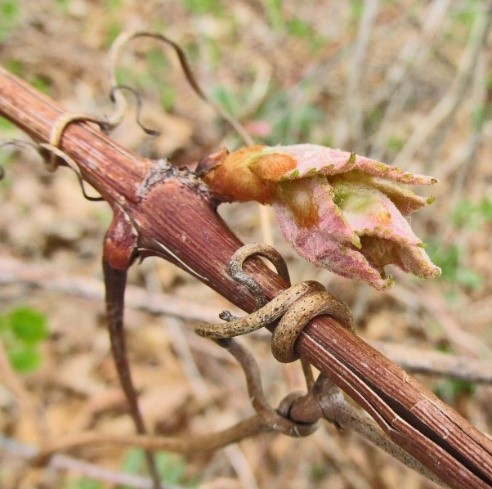 Tendrils. Grape vines have tendrils that are touch-sensitive and wrap themselves around anything it can find, including itself. When a tendril reaches something solid,  specialized cells elongate on the opposite side so it can curl around that object. This adaptation means the grapevine doesn’t waste energy creating its own support, like the trunk of a tree, to help its leaves to reach for the sun. These tendrils get more interesting all during the season. 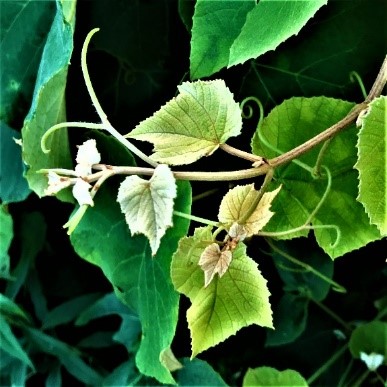 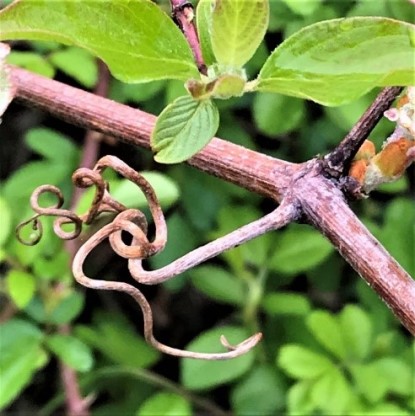 Leaves start out softly hairy and pinkish before they turn green. I assume this helps the plant’s new leaves not get eaten when they are young. I couldn’t stop taking pictures. 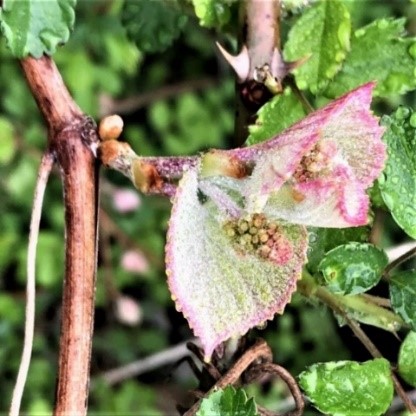 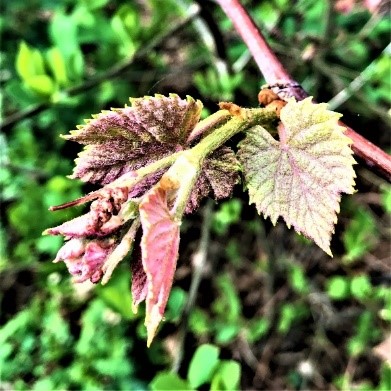 The lower surface (abaxial) continues to be hairy (pubescent) and the hairs are tangled and wooly (tomentose) as the leaf matures. 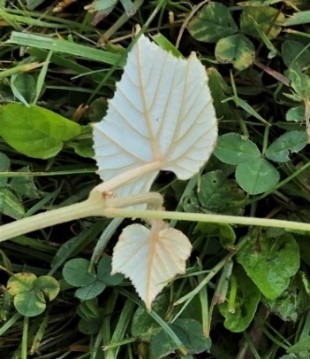 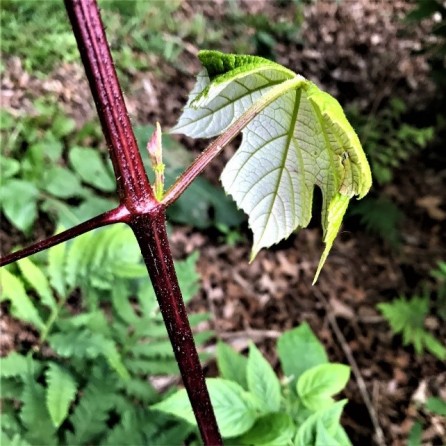 Inflorescence. Below: The flower cluster is a panicle, a loose cluster of branched, stalked individual flowers (florets). The mature leaf is shallowly lobed with shallow teeth, another clue it might be a Fox Grape. It has lost its hairiness on the top (adaxial) surface. Adaxial, abaxial: I find those terms impossible to remember even when I look up the Latin meaning.  Ad means away or down, and “ab” means toward. That doesn’t help. I need to look at the “underside” of a mature leaf next year to make sure it is tomentose. This will help me get an accurate identification. 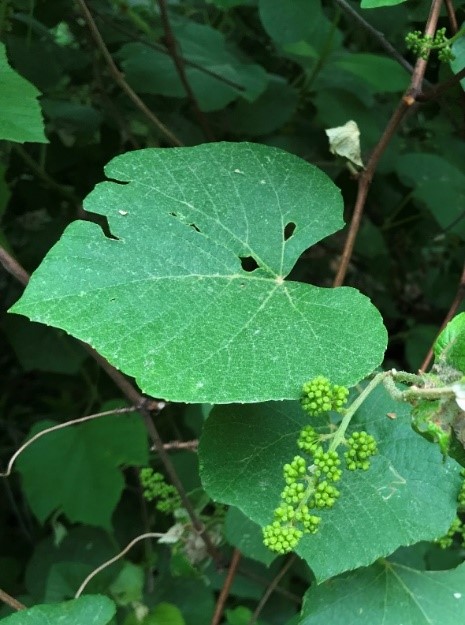 Sepals and Petals. The perianth (both sepals and petals) is unusual. Below left: Flower buds are formed by fleshy petals and not sepals which are tiny or not there. Right: 5 thick petals curl up from the bottom and drop off. 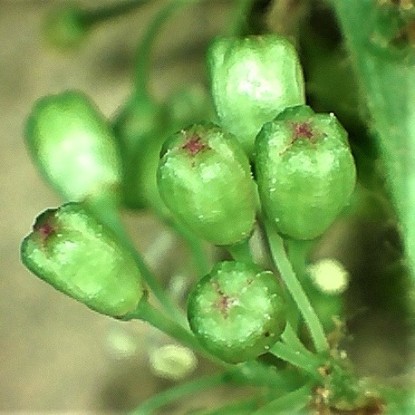 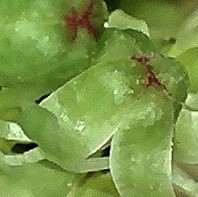 Stamens and Pistil. Individual florets can be male (staminate) or female (pistilate) on different plants which might make them dioecious. But there are other combinations: nonfunctional stamens on female flowers, non-functional pistils on male flowers or both functional stamens and pistils. Some describe this as subdioecious or almost dioecious. I will look closer next spring. I only found staminate flowers (below) and no pistilate flowers that would form fruit. 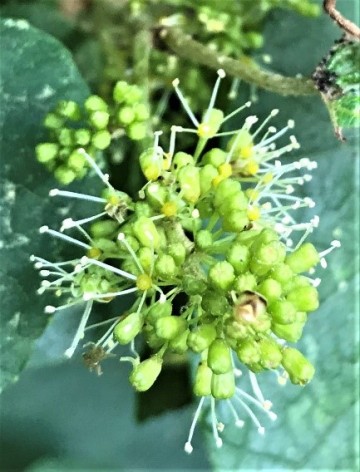 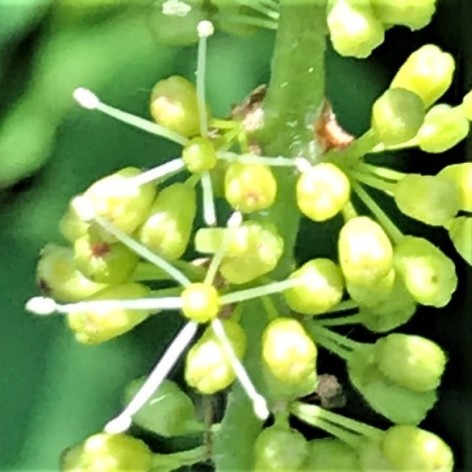 Fruit/Fall Leaves. Left below: I finally found one plant with some grapes. 7-6-18. Unfortunately, I missed the female flowers and when I went to find the fruits again they were gone. But now I know where to look next year. The fruit is a berry, fleshy with 2 or more seeds. Right: The leaves turn color in the fall and you can see how they climb and take over. 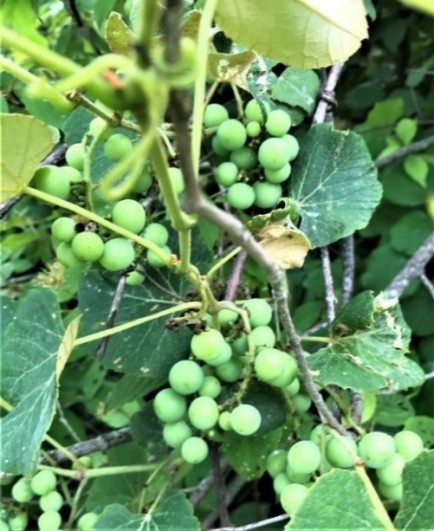 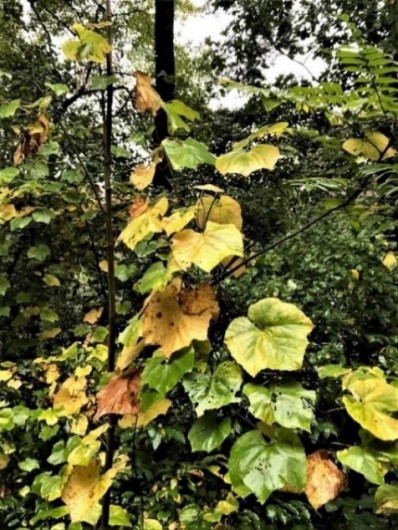 Associates. Left: a gall I think made by a midge. A plant gall is formed when something causes the plant to grow in an abnormal way. I don’t know what caused the odd coloration on the right. 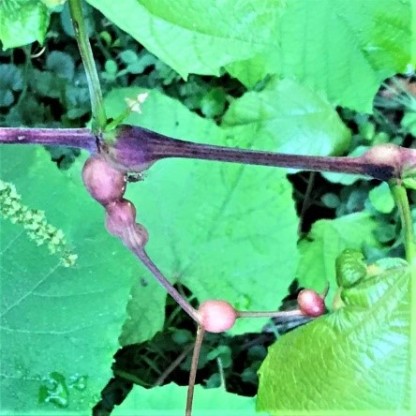 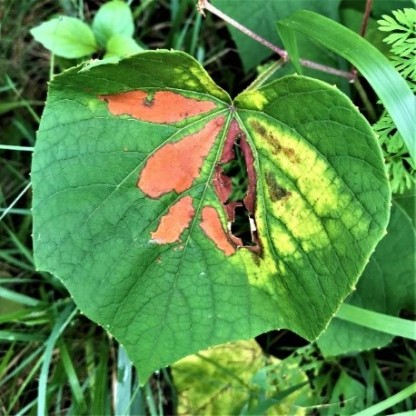 Abstract Closeups. I was attracted to the colors, textures and patterns everytime I saw this plant and had a hard time selecting only a few images. And what are those green blobs on the edges of the teeth in the bottom left image? 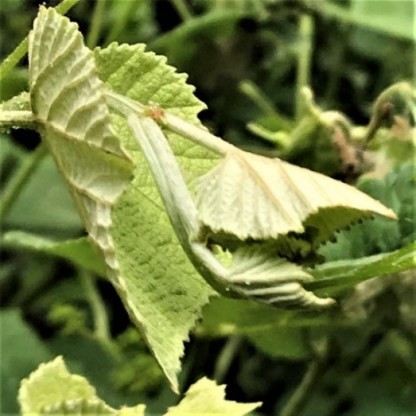 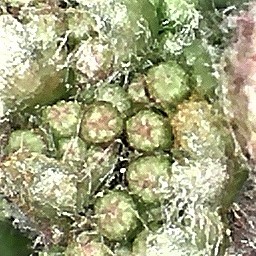 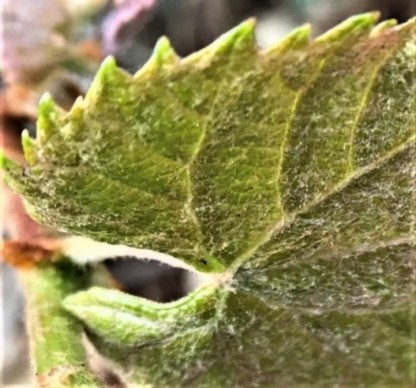 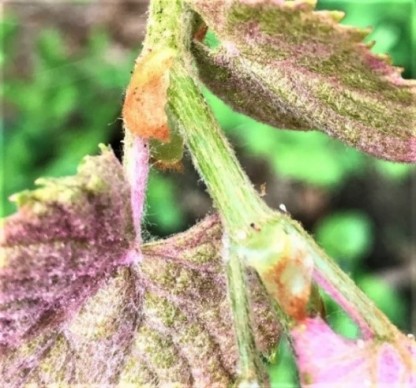 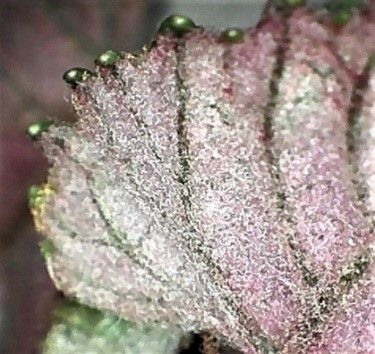 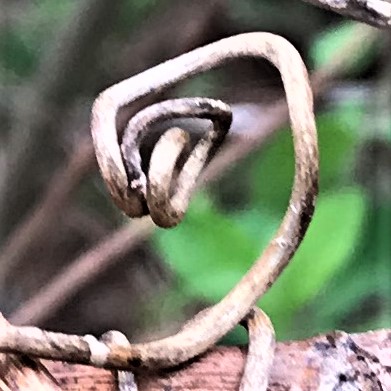